Sandi and I were invited to dinner last night by Sue.  Sue lives in Santa Monica and she suggested meeting at 17th Street Cafe, near her house and close to the Aero Theater where we were to watch the movie "Amour".

I have never been to this Cafe though they have been there since 1989. A lot of small restaurants have come an gone since then.  Sue raved about their macaroni and cheese; so she ordered that for our table. It is called the Three Cheese Fusilli which is a blend of 3 melted cheeses and fresh cream (already I knew this had to be good). It was finished with baked macadamia nut crust on top....yummmmm! It really was deeelicious. 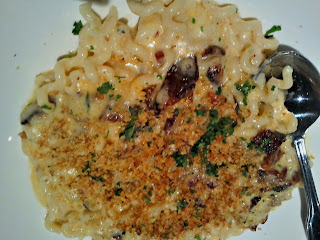 Sandi decided on the Mediterranean Salad which didn't have greens. It consisted of cut tomatoes, cucumbers, roasted peppers, olives and of course, feta cheese tossed in balsamic vinaigrette.  It looked good but that alone would not have satisfied me.  Sue ordered the Caesar Salad with chicken; also looked good but that alone would not have satisfied me either, even with the Fusilli on the side. It was a cold evening and we talked about comfort food so I ordered the Grandma's Pot Roast (while it lasts). At first, I couldn't decide if  I wanted the Pot Roast or the Beef Stroganoff till Sue reminded me that in the menu, the Pot Roast had a "while it lasts" note. That did it! It really was tender that I didn't need the knife to cut the meat as it just flaked off when it came in contact with my fork. Generous person as I am (it was a big portion), I had Sandi and Sue have some (not too much) of it.  The verdict was unanimous....best dish of the evening. 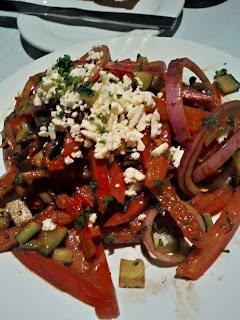 We didn't have time for dessert plus nothing really caught anyone's eyes though, across the street was Sweet Lady Jane where there is an abundance of desserts.

I would definitely go back to try the the many enticing things on their menu plus I must have that Mac and Cheese again and will order it with shrimps next time.  17th Street Cafe is located at 1610 Montana Avenue in Santa Monica, California.