I'm sure you have heard of Yogurt Pie before. This is an easy dessert to make. No baking required, just buying the ingredients. You will need a ready-made Graham cracker pie crust. I usually use the chocolate crust, but it is currently unavailable.

You will need a tub of Cool Whip; I use extra creamy and 2 containers of your favorite yogurt flavor. I used  Noosas's Raspberry Rhubarb. You mix everything together and plop it on the pie crust and freeze. This time, I got some raspberries and mashed them with a fork and added some honey and mixed it in. Just freeze the pie. If you like an ice cream texture, serve it frozen. I personally thaw it a bit, so it is nice and creamy.

There might be a few calories in there, but don't feel guilty since yogurt and fruit are good for you.
Posted by Karina at 3:09 PM No comments:

My mother made the best Bacalao (codfish) cooked the Spanish way. I remember her cooking it and serving it during Holy Week when we couldn't eat meat. It was quite salty, and it was best served on top of steamed white rice or on toasted pan de sal (Philippine rolls) for breakfast. The last time she was here from the Philippines, she had made it while a friend was here, and we both helped her shred the codfish, which was time-consuming. I have never attempted to make it because of the work involved.

Two weeks ago, I thought it was time to experiment. I called my sister-in-law Grace in Singapore to ask her for pointers since she has religiously made it for her family. I bought the salted premium codfish from La Española Meats in Harbor City, California. The fish has to be soaked in water overnight to get rid of some of the salt. It is cooked with lots of onions, olive oil, tomato paste, and tomato sauce. It is then left to simmer for 4 hours. A friend was here at the time and offered to help me shred the fish. She then asked why I couldn't put the fish in a food processor instead of tearing by hand. What a great question, and I couldn't think of an answer as to why not? And so I did, which made the preparation a lot quicker and efficient.

The end result was pure magic. It was delicious served on Japanese rice (a bit sticky). Everyone loved it and couldn't get enough of it. I had left-overs so a couple of days after, I served it on my favorite pasta, Barilla. The pasta was ready-made, so all I had to do was heat it in a bit of olive oil. It was another successful and enjoyable dinner. This is one time you really do not need to add any parmesan cheese since the bacalao is already salty.

Posted by Karina at 8:43 PM No comments:

Tiny Tacos from Jack in the Box

These tiny tacos from Jack in the Box are not bad. The tacos come 15 to a box with 2 flavors. Though tiny, they are filling enough for a nice lunch. The Regular Tiny Tacos are just like the ones you used to get for 99cents for two. It does come with a creamy avocado-lime dipping sauce. The Loaded Tiny Tacos are loaded with cheese sauce, shredded lettuce, and taco sauce.

The actual picture I took was not as enticing as the picture I got from my laptop (surprised)? They were delicious. I didn't know how many were in the box as I ate one after the other, and I even thought of taking a few home to eat later, but that never happened. I ended up eating all of them. 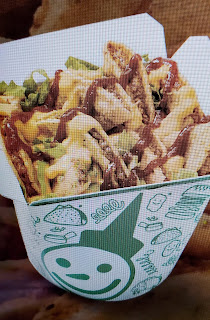 Posted by Karina at 9:25 AM No comments:

It's that time again; Lent, wherein I have to be imaginative and think of what to eat on Fridays aside from pasta which is fine with me but not everyone shares my enthusiasm for it. A friend mentioned to me that Arby's is having a 2 for 1 sale on their fish sandwiches. I was game to try so three of us went yesterday.

The Filet of Fish Sandwich could be ordered with your choice of tartar sauce or cheese. We all agreed that tartar sauce would be better. The photo showed their limited time special of the Fish Sandwich, a bowl of White Cheddar Mac N Cheese and a Mint Chocolate Shake. They all looked good. 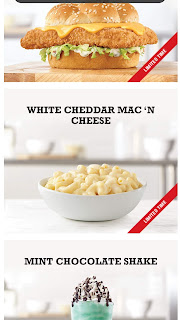 Since we were all sacrificing by ordering fish, we didn't feel guilty ordering the mac n cheese and the mint chocolate shake. The sandwich was delicious especially after adding some of their "horsey" sauce which is horseradish which gave it a little kick. The mac n cheese was creamy and went well with the sandwich. The shake was outstanding because it had pieces of that lovely Andes mint chocolate that everyone loves. Who doesn't love those mints??? 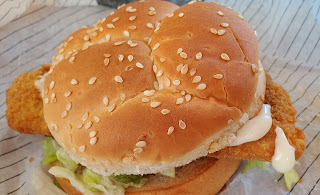 We can't wait to head back to Arby's next Friday. I was informed by the nice gentleman that the "special" will be available until Easter.

I finally made it to Burrata House. I was planning on attending their inauguration but unfortunately, I had a bad cold and didn't think anyone would appreciate me coughing on their burrata. Sandi and I had the address but we could not find the place. After walking back and forth on Hollywood Blvd., we guessed that it must be in the outdoor shops and dining next to the Dolby Theater which is called Hollywood and Highland Center. We found a security guard and asked her if she knew where it was and she directed us to the 3rd-floor dining deck.

Burrata House is a small take-out place wherein you place your order on a tablet but not before seeing the pictures of everything that looked delicious. It was hard to make a decision. We finally decided to split an order of their freshly made pasta with the Bolognese sauce. The Bh-olognese consisted of prosciutto, bresaola pork, beef, carrots, celery, onions, tomatoes, wine, stock and olive oil with a whole burrata. The Crudo Panini was our second choice;  Prosciutto Crudo di Parma, Italian Rosetta bread, burrata, Italian extra virgin olive oil, organic tomatoes, salt & pepper and arugula.

Watching Elisabetta, our server was torture. Torture, in a good way, if there's such a thing. The way she assembled the sandwich was pure art as she drizzled olive oil on the bread and layered the arugula, prosciutto, tomatoes and then topped it with the fresh soft burrata. She carefully made 2 precise incisions on the burrata like a skilled surgeon would and drizzled more olive oil and a dash of pepper. When everything was on the bread, she carefully laid the top bread and squeezed it a bit before cutting it in half. I had to refrain from drooling as I watched her carefully orchestrate the assembly.

The moment of truth. We sat outside on this beautiful day and attacked the Bolognese first since it was hot. It was pure delight, That ball of burrata mushed on the pasta bolognese was heaven. Bolognese will never be the same without this wonderful treat. The panini was excellent as well. The choice of bread went well as the size was big enough for us to split. 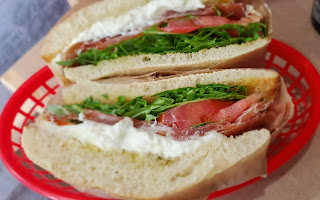 The gentleman after me had ordered the Vegetarian Caprese Bowl which I know our vegetarian friend Sujata would have loved. It had homemade pesto, on top of the burrata, organic mixed greens, heirloom cherry tomatoes, arugula, farro, Italian extra virgin olive oil, and of course salt & pepper. He was kind enough to allow me to take a picture of his bowl.

There's only one terrible thing about Burrata House which is;  it is not near My House! Currently, they have 2 locations: one in Culver City and one in Hollywood.
Posted by Karina at 6:17 PM No comments:

Sandi's son sent her an assortment of Chevoo Goat Cheese. He sent it all the way from Florida to California. He had raved about their cheese and she was kind enough to have me try it. The small bottle consisted of several chunks of flavored goat cheese bathed in olive oil.

I took a chunk and smothered some on a piece of cracker. It was scrumptious! As soon as I got home I googled Chevoo Cheese and found out they are made in Healdsburg, California. A couple from Australia started the company making goat curd hand blended with spices, herbs, chilies, pollens then paired with extra virgin olive oil. The cheese is infused with crushed botanicals for 8 weeks.

I discovered they had several interesting flavors which I absolutely had to try hence, I immediately had to place an order. I ordered 3 bottles; Urfa Chili & Lemon, Smoked Salt & Rosemary which I tasted at Sandi's house, and Italian Black Truffle.

Chevoo pronounced shay-voo comes from Chèvre which is French for goat cheese and EVVO is for extra virgin olive oil. You could go on their website or order from Amazon but the best deal is from Whole Foods which costs $5.99 a bottle.

I was recently invited for lunch at Benihana in Torrance. Since the invitation was for lunch, I assumed it was for the express lunch wherein they serve you in the bar area with good food without the theatrics. We were seated with 2 other couples aside from my friends Francine, her husband Tony, and their neighbor Gerda.

Gerda, who was celebrating her birthday, ordered the Scallops and Shrimp. The rest of us ordered the Filet Mignon and Shrimp with the Chicken Fried Rice. The entrée came with a choice of soup or salad. We all opted for their delicious soup. Our entertaining Master Chef Kenny did not disappoint us with his theatrics.

One should never dismiss Benihana for a good meal. I, myself, tend to think it's all theatrics, so it was a good reminder. I thank Francine and her husband Tony, for inviting me to good old Benihana.

Posted by Karina at 3:22 PM No comments: