Though Sujata's birthday was in early December, it wasn't too late to celebrate her birthday in January. She treated us to a very nice dinner at Petros, the Greek restaurant in Manhattan Beach. 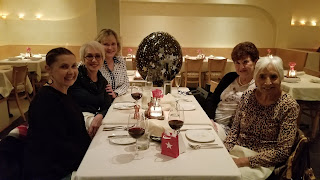 Mertz had never been at this restaurant before so she was in for a treat. The birthday girl, a vegetarian, ordered the Horiatiki Flatbread Pizza; tomatoes, avocado, olives, red onion, capers, EVO, and oregano. We all were impressed by the looks of it. Sandi ordered the Kokkinisto; slow-cooked boneless short ribs in a tomato and allspice broth served on top of spaghetti topped with Reggiano Parmesan cheese. The short ribs were tender and just fell apart as she twirled them with the spaghetti. She insisted I try it so I indulged and was not at all disappointed. 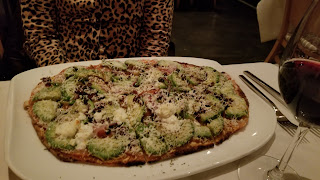 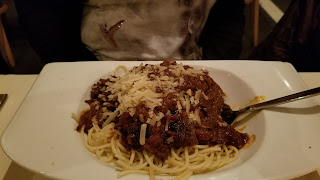 Cindy, Mertz and I had to have the Moussaka; a classic Greek dish layered with eggplant, ground beef, tomatoes and homemade béchamel sauce. That was delicious as ever. Only Sandi didn't finish her entrée which is probably because she ate too much bread before. The bread was hard to resist since it was always warm. 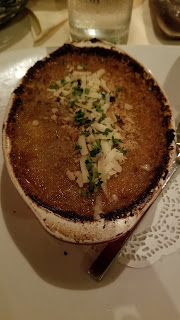 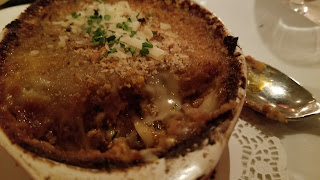 We had to have dessert so we all decided to share an order of Bougatsa; vanilla bean and semolina custard wrapped in phyllo served with vanilla ice cream topped with walnuts. We have had this previously and have always made it a point to order it since it really is delicious. The Baklava was also delicious, the walnuts wrapped in phyllo were soaked with a citrus syrup and also served with vanilla ice cream. 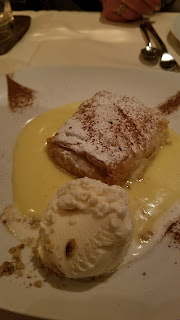 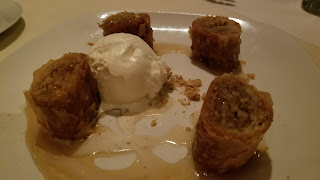 They presented Sujata with her very own birthday dessert; Loukouma. These were baby Greek doughnuts drizzled with Greek honey, cinnamon and toasted walnuts, served with vanilla ice cream. She was generous enough to share her numerous doughnuts. I was surprised at how good they were. I expected them to be sickly sweet but they were not. 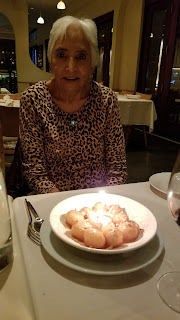 The birthday balloon that we passed around for numerous years has come to an end. We decided that we would end this tradition on the last birthday of 2017. It had a good run while it lasted.

Mertz invited us to Thursday's Tre Piatti at Bettolino Kitchen. The three-course menu can be had with or without wine pairing. She and I opted for the wine pairing while our friend Sandi passed and decided to just have the "house" water. The three courses looked good to me though I knew my two friends would have a problem with the Salmon because one dislikes fish and the other dislikes Salmon. They are not equal opportunity eaters. 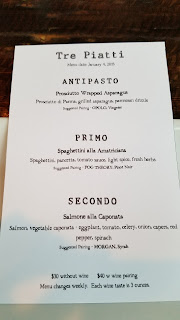 We all enjoyed the Antipasto of Prosciutto di Pama wrapped around grilled asparagus drizzled with Parmesan sauce which was paired with white wine. The warm bread served with olive oil was very good and we tried not to eat too much but we failed because we ended up asking for more. The Pinot Noir was perfect for it. 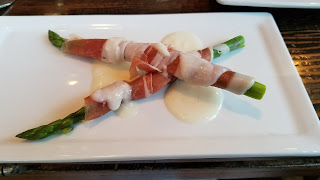 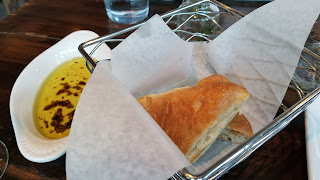 Our Primo was a serving of Spaghetti alla Amatriciana, a slightly spicy tomato sauce with pancetta and fresh herbs. We loved this aldente spaghetti. I could have eaten a big bowl of it. For the Secondo, I was the only one that had the Salmone alla Caponata; salmon, vegetable caponata-eggplant, tomato, celery, onion, capers, red pepper, spinach. It was fresh, flaky and moist and went well with the vegetables. This was paired with a syrah wine. Mertz and Sandi had the same entree but without the salmon; but they had extra veggies. Mertz later commented that next time, if she does not like one course of the three-course menu, she will just order from the regular menu. I know they do not have substitutions because the restaurant can go crazy with everyone asking for different things, however, I think that perhaps they could substitute shrimp or chicken for people that do not eat fish. 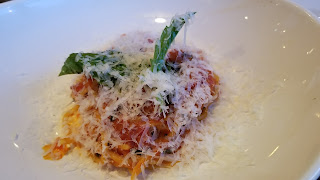 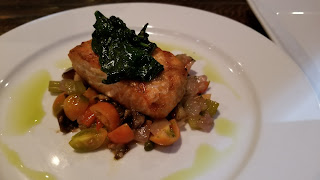 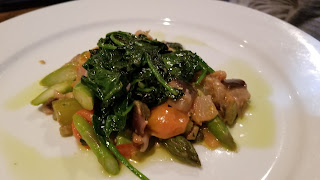 Dessert had to be the Salted Caramel Semifreddo; semi-frozen salted caramel mousse layered with graham crackers with a chocolate sauce. We have had this before and absolutely loved the very light and not so sweet dessert. We also tried the Crostata di Pera, caramelized pears in a pastry crust with vanilla sauce and powdered sugar.  We were not too excited about this dessert. We all thought it could have been flakier but the salted caramel made up for it. 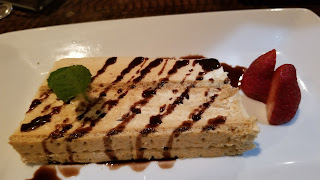 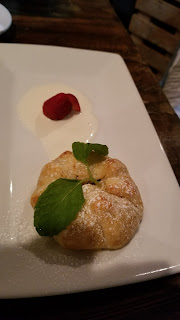 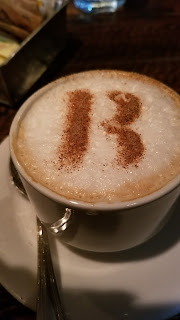 The service was excellent. We all loved Sonia who served like a pro even if she hasn't been there that long. We hope to see her soon.

It was a delightful evening and just the right amount of food. Bettolino did not disappoint. Bettolino is located at  211 Palos Verdes Blvd. in Redondo Beach, California.
Posted by Karina at 10:11 PM No comments:

Bring on the Ham

New Year's Day Sandi decided to bake a ham. Her ham was delicious served with a raisin pineapple sauce. What's funny is she doesn't even like raisins! Of all the other sauces she could have made, why did she choose to make the raisin sauce? Her response was, "Because everyone else likes it." Aaron and I did not complain.

With this ham she thought she would serve something healthy, so instead of mashed potatoes, she made mashed carrots and parsnips which was beautiful on the plate and delicious as it looked. She also served some coleslaw. It was a perfect combination of texture, color, and taste. We finished a bottle of champagne; by we, I mean Aaron and I since Sandi had her mini-champagne glass. 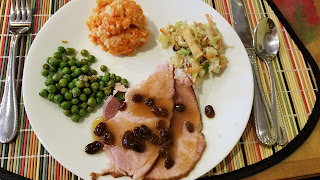 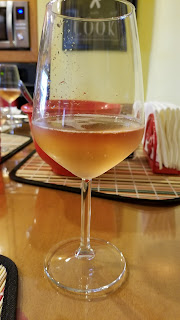 For dessert, she served a scoop of salted caramel truffle ice cream with your choice of sauce. My choice was Fran's chocolate and raspberry sauce. 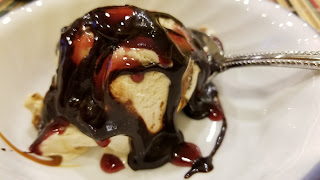 New Year's tradition is to wear polka dots to bring in money for the year. I wanted to be sure so I wore lots of big polka dots. Sandi was not as greedy so her dots were small. Aaron, however, was just as greedy. 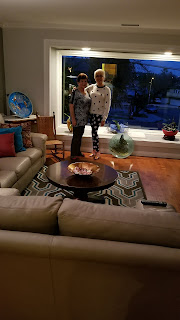 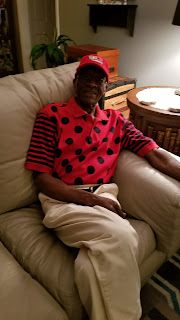 It was a great meal to start the new year. Here's to many more great meals to come. Cheers!
Posted by Karina at 6:08 PM No comments:

Three of us were supposed to drive to Beverly Hills to see the movie Noviate (which by the way was a very good movie). Sujata bailed out when she found out her Tom Brady was going to be playing yesterday. She actually ditched us for Mr. Brady. Honestly, I can understand because I would ditch anyone for Richard Gere.

I made reservations day before yesterday for a late lunch at Il Pastaio in Beverly Hills. This place is always crowded and sometimes service can be slow. Even with reservations, we did wait a bit. We could have gotten a table earlier if we had chosen to sit outside. Though they had heaters, we chose to wait since pasta usually gets cold fast. We ended up sitting in the bar which was fine with us. They already had balloons set up for New Years celebration. 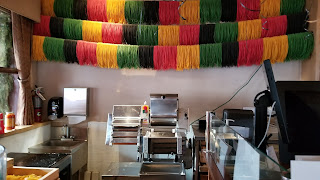 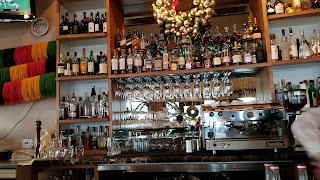 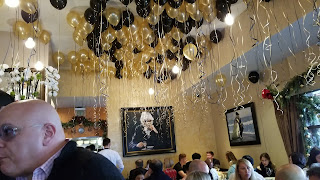 Domenick, the bartender, was attentive and on the ball. We promptly ordered as soon as we got our menu. It took 10 seconds to decide we were going to split a Caesars Salad and have an order each of their wonderful Spaghetti Cacio e Pepe. The salad was perfect to go with our pasta. I can now confirm 100% that their Cacio e Pepe is the best in Los Angeles. Sandi agreed with me. We have had this dish at other Italian restaurants and none have been as good. Everything about it is just perfection. It is aldente, not too creamy, lots of pepper but not overly peppered. 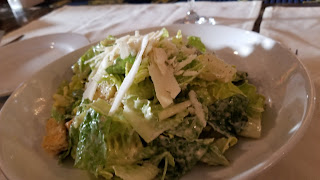 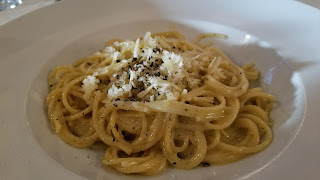 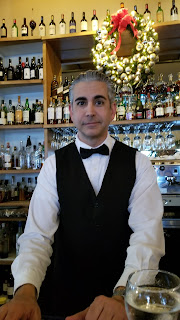 By 5:00 p.m., Sandi and I had celebrated New Year's Eve and even had spaghetti which is what one should eat for New Year for a long life. Though technically it isn't Jan.1st yet, it is Jan 1 in the Philippines and in the orient where they have this superstition. 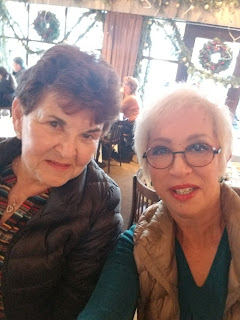 I have blogged about this restaurant numerous times. You really cannot go wrong with this authentic Italian restaurant. Il Pastaio is located at 400 N. Canon Dr. in Beverly Hills, California.

Posted by Karina at 1:04 PM No comments: