If the pasta at Il Pastaio is the main actor, it is only fair to say that the supporting actor is Carmelo, the Italian waiter who made our meal more enjoyable. My friend Mary took me there just a week ago and Carmelo took very good care of us. 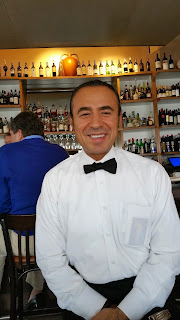 A few nights ago, I had the pleasure of going back with Sandi and my brother Gary. Sandi and I got to the restaurant half hour before our reservation and Gary was going to be there at 5:30 p.m. We were hungry so we ordered Calamari Fritti to start. When Gary arrived he announced that his stomach was not feeling normal so he would just order pasta; Cacio e Pepe. Sandi had to order the wonderful Cacio e Pepe and though I just had it a week ago, I wanted to have some of it again and wanted to try the Pappardelle with venison and mushroom ragu. Sandi and I decided to split both as we usually do to. I have previously blogged on the Cacio e Pepe which is excellent. The pappardelle was homemade wide green spinach pasta that was cooked aldente and very tasty ragu. For those that would not venture into venison or boar.....I plead to you to please don't even think of the animal. Every time I have had ragu made from boar, lamb or venison, it has never been disappointing. This was particularly delicious. 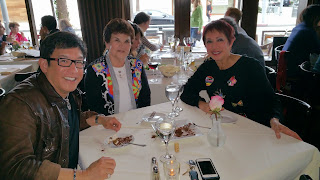 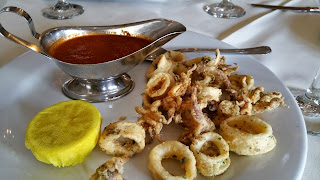 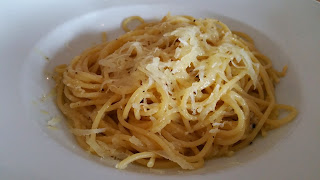 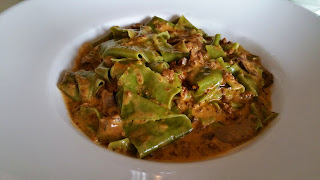 Sandi and I did not plan on ordering dessert even if I missed the Tiramisu. Carmelo surprised us with an order of the Tiramisu. Sandi who doesn't like coffee did not touch it. Gary, whose stomach was queasy, made a sudden recovery after the first bite. He realized and announced that all he needed to calm his stomach was a plate of pasta and Tiramisu. I of course did not want to seem ungrateful so I had to partake in the consumption. It's one of the best tiramisu I have had. 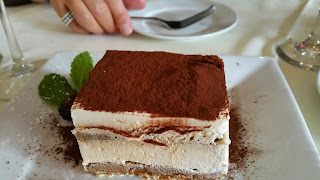 Il Pastaio is at 400 N, Canon Dr. (Brighton) in Beverly Hills. Thanks to Carmelo and Nina the manager for another fabulous meal and service.
Posted by Karina at 9:50 PM