My friend and I decided to have dinner there last week. They made changes inside, they extended the dining room in what used to be part of the kitchen. The bar looks more inviting and the decor suggested "Italian". It was nice to see a familiar face, Christian the waiter that worked previously at Cafe Cego's who welcomed us to this remodeled restaurant.

It was a bit busy and though we were told the bread was coming, we had to wait a bit before it finally arrived. This crusty warm bread was good served with a tomato dip made with garlic and herbs. Our only complaint was it came too late, that when I finished  eating a slice, our entrees arrived. It is typically nice to sit and enjoy the bread with wine before you get your main meal. 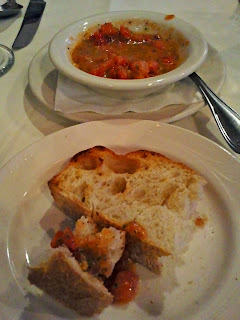 We ordered the Tris di Pasta which was trio sampler. What better way to be introduced to the different specialties. It consisted of penne arrabiata, rigatoni gorgonzola and linguini pesto. The penne arrabiata was spicier than expected. It was good, just make sure you have that wine next to you or cold water. The rigatoni gorgonzola was our favorite among the three, it had the most flavor and was not too creamy. The linguini pesto was our least favorite.  It just didn't do anything for us. 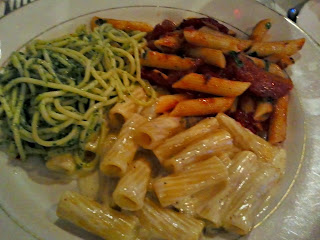 The other entree was the Fettuccine Michelangelo; sauteed onions, prosciutto, mushrooms in cream sauce with grilled chicken. This was not bad, though a bit too rich. 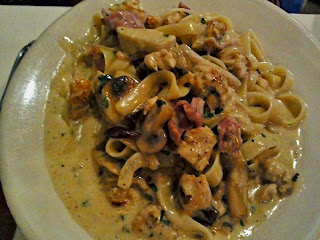 For dessert, we wanted something light so we had the dark chocolate ice cream served in a cacao shell or pod, something I haven't seen before. This is where the cacao comes from according to Christian. It was interesting to see this pod....ice cream itself was nice and creamy though we suggested that maybe it needs something white; maybe cream  or white chocolate to offset the very dark color. It just needed something to pop out to make it more appealing to the eye. 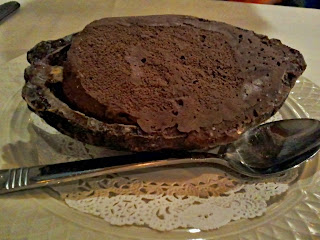 This is not the best Italian restaurant I've been to, though I have to say we had a much better experience than Mama Terano next door.  We would definitely go back to try the other house specialties.
Posted by Karina at 2:33 PM