I previously blogged about these Mango-Pineapple scones and have tagged them the most expensive scones in the world because I ended up getting a speeding ticket on my way home which cost me $300!

Today, Memorial Day, as I went in L'Amande Bakery in Torrance to buy some tarts for dessert tonight, Fernan, the baker told me they had Tropical Scones. It was only 12:30 and the scones don't  usually come out till 3:00.  He announced that they were closing at 3:00 today because of the holiday and that the scones just got out of the oven. I had to buy at least 6 of them. When I got home, I discovered that they were still warm and it would  have been a crime not to eat some before I had planned to freeze them. My husband just finished his lunch and decided to join me for my dessert (lunch was popcorn at the theater). 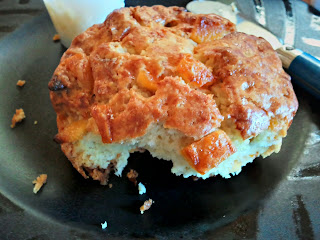 I haven't had these scones since I got my ticket. I enjoyed them even more as it was downright cheap compared to the previous price I had to pay. The mangoes were sweet and so were the chewy pineapple.  As usual, the scones were crusty outside and with some butter it was super!